It’s nearly impossible to overstate the importance of our hands. It is one of those parts of the body that most people take for granted, until they start to experience pain or discomfort that makes even mundane movements difficult. Wrist Tendonitis (Tenosynovitis) is a condition that can make life far more challenging than expected if left untreated.

What is Wrist Tendonitis?

Tendons are long bands of fibrous tissue that attach bone to muscle. In the wrist, this includes tendons that run throughout the forearm and connect to the hand bone.

The wrist tendons are responsible for virtually all our wrist movements, including:

Tendonitis of the wrist is the inflammation of one or more of the tendons.

The inflammation is often linked to micro-tears in the soft-tissue that can occur suddenly from an accident or, more commonly over time with age and repetitive motions that wear down the tendons.

Symptoms of this condition will vary based on a person’s activities or specific injury, although wrist tendonitis often leads to soreness on the top or bottom of the wrist, stiffness, and pain when opening or closing the hand, among others.

What is De Quervain’s Tenosynovitis?

Like wrist tendonitis, which can be extension, flexion or a combination of both, tenosynovitis, affects the tendons on the thumb side of the wrist. It is sometimes called De Quervain Syndrome.

De Quervain’s Tenosynovitis causes inflammation and can lead to symptoms that include:

The exact cause of tenosynovitis, according to the Mayo Clinic, is not known, but it is likely similar to what causes wrist tendon pain with wrist tendonitis.

The factors and causes that lead to wrist tendonitis can vary. There are medical conditions that can lead to the condition, such as diabetes, high cholesterol, or even some genetic disorders.

Even taking Nonsteroidal anti-inflammatory meds, like ibuprofen, can reduce swelling and pain, but may also decrease tendon strength if taken regularly, for several weeks at a time.

Perhaps the more common causes of pain in the wrist tendons are acute injury, repetitive movements, and age-related effects on the tendons.

As with other forms of tendonitis, like tennis elbow, repeated wrist motions can cause micro-tears in the tendons that lead to tendonitis.

Common activities or sports known to cause tendonitis in the wrist include:

Whether it’s over training or simply living an active lifestyle as you age, wrist tendonitis can affect anyone.

Because soreness and swelling might dissipate as a person warms up or using over-the-counter medications that reduce pain, many people continue their normal levels of activity. Unfortunately, this continues to injure their wrist tendons and can lead to chronic tendonitis issues.

Whatever the cause for wrist tendonitis or tenosynovitis, the symptoms can range from mild to severe and make normal movements, like turning a doorknob, pulling a weed from the garden or taking a long bike ride painful.

At first, a person might notice a slight ache or soreness in their wrist as they perform a wrist motion. This pain may decrease as their wrist warms up.

With tendonitis, though, the pain can actually lead to reduced wrist strength and an inability to bear the kind of weight they were previously able to handle.

Other symptoms of wrist tendonitis can include:

It’s important to not ignore continued wrist pain because it might be a sign of developing tendonitis that requires treatment.

For the most part, treatment approaches for this condition are non-surgical, though in some severe cases wrist tendonitis surgery is needed. The first thing to do is stop activity that causes pain in the wrist. A minor injury is likely to heal with rest, but if the problems persist, a visit to a sports doctor is recommended.

Diagnosing tendonitis in the wrist will require a physical examination of the wrist, a discussion of symptoms and recent activity, along with range of motion tests guided by your physician.

Imaging technologies, such as X-rays, ultrasound or MRI might also be prescribed to get a better picture of the exact problem and rule out other issues.

Once diagnosed, it’s vital to limit movements that cause inflammation. Your doctor might provide you with a wrist tendonitis brace to help stabilize the wrist and reduce motion that will lead to further injury.

Over-the-counter medications may be prescribed to reduce swelling and pain, as well.

Other wrist tendonitis treatment approaches for Tenosynovitis can include:

Applying ice or a cold pack to the wrist, while keeping the wrist in a neutral, and supported position after activity can help decrease inflammation and pain.

This is known as the RICE Method, which stands for Rest, Ice, Compression, and Elevation. It’s recommended to ice the wrist while resting it at an elevation above the heart.

Wrist tendonitis exercises, either performed during a physical therapy session or at home after proper instruction by a doctor, can help with pain and motion.

These exercises should only be done after a certain amount of healing has occurred in the wrist first.

3. Decreasing Weight Loads on the Wrist

Decreasing weight loads on the wrist after a person returns to normal activity can allow for additional healing time and minimize the amount of strain on the affected area as well as reducing pain.

Because there’s no anesthesia or risk of infection with Shockwave Therapy, this treatment method decreases the recovery downtime that is usually associated with other more invasive procedures.

Platelet-Rich Plasma Therapy (PRP) is a form of Regenerative Medicine that uses a concentration of person’s own blood platelets that is injected into the areas of the wrist affected by tendonitis.

This leading-edge therapy is known to promote healing in soft tissue. Depending on the severity of a person’s condition, more than one set of injections may be recommended.

Wrist tendonitis surgery is considered a last resort, and should only be discussed after all other less invasive procedures have been tried.

With surgery, there are varying approaches, either open surgery or arthroscopic surgery. In either case, the goal is to remove or repair the damaged tissue. There is always an inherent risk with surgery of other complications, and it will also come with a longer recovery period.

Wrist tendonitis symptoms caused by tenosynovitis from overuse or aging can lead to pain in the hands, fingers, thumbs, and wrist during many types of motion, and even while resting.

Speak with a doctor at the first signs of pain in the wrist, and hopefully these treatment methods will provide some relief and speed the healing and recovery process. 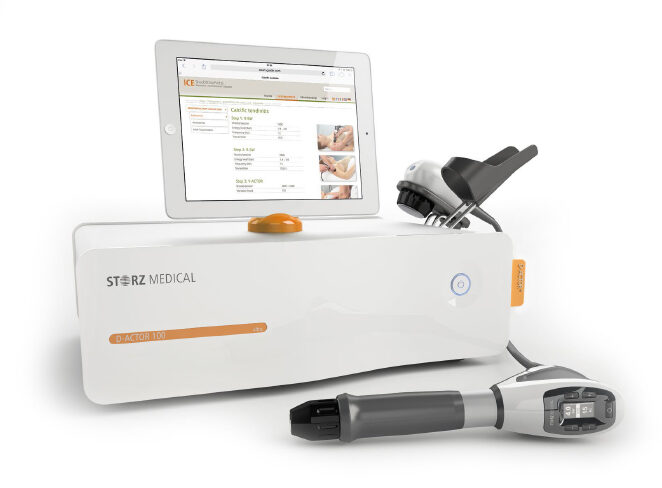